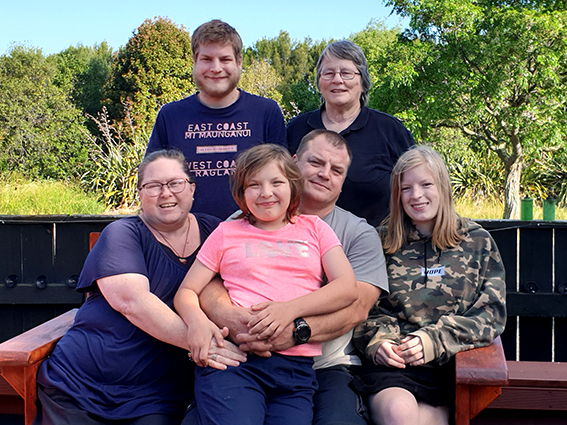 Jackie and Simon Prichard have Alex, 20, and two younger daughters, Casey and Emma. Alex has FASD and Jackie long ago bravely faced the knowledge of her own part in this – and armed herself with it.

“It’s not about me, it’s about Alex. There is no safe level of alcohol when you’re pregnant – something I didn’t clearly understand at the time, and I want others to avoid the same thing.”

“I was young when I had Alex – 24. I was a social drinker but had friends who drank heavily. When I was pregnant, I’d say I probably had about 3-4 sometimes, but over many hours. The ante natal class we went to was pretty terrible, looking back on it. My partner did ask them about drinking; they said they’d talk about that another time, but they never did as far as I know. My GP said ‘don’t get drunk’ and I didn’t, so I thought it was fine.

“Even down the track when we were trying to get a diagnosis, when I told them how much I had drunk in pregnancy – and I wasn’t trying to hide it – they said, ‘that’s not enough to cause an issue’ and they didn’t even write it down. I was lectured a lot about smoking, but no one said ‘alcohol is a teratogen’ [a substance that can cause abnormalities or birth defects in a developing fetus]. Maybe no one knew back then. Sometimes I feel like most of the focus is on those who are ‘at risk’ of drinking in pregnancy for whatever reason, but there’s no part of society that’s immune to this – awareness should be across the board.”

Jackie and Simon knew there was something wrong fairly early on but didn’t get the FASD diagnosis until Alex was eight. A DAP (Developmental Assessment Programme) a paediatrician, a social worker, psychologist and speech therapist nailed down that he was one or two markers off autism but was not ADHD. They couldn’t figure out what was going on, until a second assessment with a new social worker asked Jackie again what her alcohol intake was in pregnancy. And there it was.

“All I could think was, oh my God – I have done this to our son. The guilt was huge – but then within a couple of weeks I realised that it wasn’t going to help anyone. So I started doing some research – I found some American stuff which was helpful, then Alcohol Healthwatch New Zealand popped up. I sent an email which got to Christine Rogan [now National Coordinator of the Fetal Alcohol Network New Zealand (FANNZ)], who contacted me straight away. Within a month of Alex’s diagnosis I was on a plane to a meeting.”

At school Jackie let the principal and teachers know about Alex and their reaction was to keep it secret, to ‘shield’ Jackie in some way, and only tell a few people. Jackie’s reaction was that she wanted as many people as possible to know. She didn’t care about what people thought of her: again, for her it was about Alex and how things would work best for him. “But yeah, you do get judged – I even had people ask me how AA meetings were going!”

Frustrations abounded in the early years of school. “Unless your child has an IQ of 70 or less you can’t get Disability Support Services. The SENCO (Special Educational Needs Coordinator) at school said jokingly that we should let him go wild and get in trouble – then we’d get some help. It’s true that the system is set up for the worst case scenario, but I was pretty keen not to go there! These kids just need someone like a PA to keep them on track at school. Whenever I was around I could see a mile away what was going to be distracting, when he needed quiet space, what was going to trigger him, and I could intercept things so he could keep going where he needed to be, you know? Without that it can all go downhill very fast.”

After the family were turned away from two high schools, they went to the third who had already had experience with one child with FASD. But the first year was spent in and out of meetings. “Even with RTLB – the Resource Teacher Learning and Behaviour funding Alex had from intermediate – he got only five free hours with a teacher aide per week.” It was a drop in the ocean, but the Prichards grabbed it. Even so, things became harder and harder in the full-on school environment.

When Alex was in Year 10, Jackie’s mother came back to NZ – she’d been living in Australia. The timing was perfect, as the wheels were coming off for Alex at school. “A Ministry of Education psychologist got involved,” says Jackie. “She came to a meeting at school and afterwards said ‘is that what you’ve been putting up with all year?’” A decision was made that Alex would be home-schooled with five hours input from a new teacher aide. “With just those five hours at home, Alex went from level 1 maths to level 8, and the same with science. Mum worked with him on English. He did so well.”

From Year 11 till Alex graduated at the age of 19, all his school work and socialising was through DTS (Disability Training Services) in Hawkes Bay. It was all about getting him at least a NCEA Level 1 to show he can focus and achieve. In the end he got there by getting a few extra credits through the ‘Red Shirts in Schools’ gateway training at The Warehouse. He also achieved a NZ certificate in Foundation Skills Level 2 Automotive from EIT (Eastern Institute of Technology).

“DTS have been so great,” Jackie says. “They’re client-led, they get people involved in planning their own goals and there’s no pressure. Through them Alex got his learner’s drivers licence – and during lockdown last year he managed to save up for a car, which actually freaks me out but I guess we’ll handle it...” she laughs. Alex has also found a happy place for himself in their local Men’s Shed. “He loves hanging out with the old guys and they love him! They help him do all sorts of projects – he really enjoys woodwork,” Jackie says.

“There have been massive changes in the system over the last 15 years,” she admits. “But there needs to be much more public awareness still, and the funding models need to change – it’s the same package for everyone and FASD kids are definitely not one-size-fits-all. They really need to be individually tailored. Also, I would say to educators and health professionals – listen to the parents! They know their kids and they know what works.”

Jackie’s go-to for input over the years has been Canadian FASD expert and podcaster Jeff Noble. “You go to so many seminars and it’s hard to focus sometimes. But the way Jeff talks I find relatable – it’s ‘average person-speak’, and it’s saved my sanity many times!”

“I look at what we’ve accomplished though, and I’m just like, wow – we are awesome! We’ve made sure Alex has had the right team assembled around him – we’re his shield and he knows that and trusts us. We say ‘nothing is impossible – until it’s impossible.’ And if things don’t work out in some particular situation I always try and leave people with a lesson around a missed opportunity. I’ll say, ‘Well, the reason that didn’t work out is because you didn’t listen to me and you did this instead of that, so maybe next time…’ And then we leave. But overall – we just generally try and focus on the positives and try not to think of what might have been.”