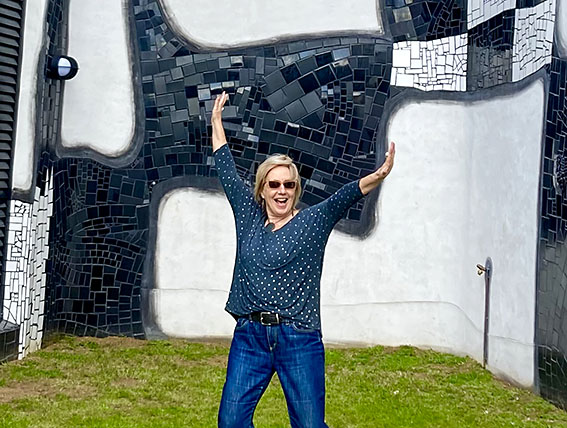 Anna Gundesen took on the newly-created role of Navigator in Tāmaki Makaurau for FASD-CAN in July, 2021. Her job was to provide hands-on support for caregivers, whānau, professionals and individuals using a brain-based approach to parenting and education.

In her first year, Anna also led the team creating our new Aotearoa-based FASD Handbook and co-facilitated a new series of NZ-specific FASD caregiver training programmes, based on one first designed by Professor Anita Gibbs for use in Australia.

It’s been a demanding role to date, but also deeply satisfying as she begins to get a handle on the needs of whānau affected by FASD in Aotearoa.

But Anna is also a parent of a tamaiti (child) with FASD. This is her story.

Anna’s professional life began with a degree in Occupational Therapy, which she practiced for several years. But her career swerved somewhat unexpectedly into the arts for a couple of decades, when she moved into assistant directing New Zealand TV and film productions.

Throughout the years of her screen career, Anna always kept up a personal educational development based on exploration of her own interests. But it was becoming a mother which sparked an education process that has ultimately brought her to where she is now.

“I was always interested in human dynamics, psychology and just observing the way people function, think and behave. This was part of directing as well, of course, but I kept feeling that I wanted to make a difference somehow."

“When we had our son in 2003, he had some pretty major allergies, so I did a course in nutrition. After that there was one in MBSR (Mindfulness-Based Stress Reduction) and later NLP (Neuro-Linguistic Programming). Learning te reo and tikanga Māori has been a priority for me for many years, too. This was always important for me in working with tangata whenua as well as for my own whakapapa and that of my whānau.”

In 2010, Anna and her partner Therese welcomed a one-and-a-half year old beautiful kotiro into their whānau, and gained permanency a year later. “We slowly started to realise that the challenges we were experiencing were more than attachment or early childhood trauma issues,” Anna says. “We were told there was possible prenatal alcohol and drug exposure – and my research eventually led me to Fetal Alcohol Spectrum Disorder.”

In 2017 Anna and Therese sought and received a diagnosis of FASD for their daughter. She was nine.

Anna remembers that year with a wry grin. “Yeah, it was a big year. Pivotal, really. Getting that diagnosis was huge – there’s grief and loss mixed with new understanding and it’s just overwhelming. You have so many questions: does this mean the loss of our daughter’s potential? Will it limit who she wants to be? Will she ever be able to live independently, will she become victimised?

"The sadness surrounding a diagnosis is not a one-off – there’s always something that brings you back to it. It’s endless and all you can do is try and accept that.” It was during this time of both heartache and a desire to understand more that Anna came across the Neurobehavioural Model created by Diane Malbin. And around the same time, Anna experienced a significant health scare – essentially an immune system collapse. "It felt like the physical manifestation of my grief," she says.

“In the light of all of this I knew I had to follow my heart and do something more meaningful for myself and my whānau. It was the catalyst I needed to completely change my career.”

Her first step was getting accepted onto the FASD-CAN Board which was a very positive experience – Anna met the FASD community in Aotearoa and stepped in to her FASD education.

In 2018, Anna got a job as Auckland Regional Coordinator for Caring Families Aotearoa. CFA is a non-government organisation which supports the caregivers of the thousands of tamariki who are in care in Aotearoa. “It was a huge learning curve – I’d never even been an employee! I’d always been a freelance contractor. I learned so much about the foster care community, about NGOs, about stakeholders and agencies, and of course I learned from the wealth of knowledge that whānau and caregivers bring with their lived experience of raising vulnerable tamariki. I was trained in trauma-informed practice which has been a solid foundation to build upon."

In 2021 Anna was successful in getting the inaugural role of FASD Navigator Tāmaki Makaurau. Alongside her role she project managed the development of the FASD-CAN Handbook (free hardcopy with FASD-CAN membership or digital downloads here). This was adapted from one created by NOFASD in Australia to include bicultural content from a New Zealand viewpoint with help from RuruHana Brownie and others. Caregivers have said the Handbook has been ‘life-changing’.

How a Navigator works

“In a typical day I’ll be fielding calls, emails and texts from families raising tamariki and rangatahi with FASD. I’ll be liaising with professionals – kaiako, social workers or psychologists. I might be facilitating training sessions or hosting one of the two monthly support groups I run in Tāmaki Makaurau, or I may be engaged in raising FASD awareness in organisations and schools.

“Something that I see all the time is that many professionals don’t consider parents the experts in their child’s behaviour ­– although of course they are. In this situation it’s often been helpful for whānau to have me as an advocate in meetings at schools or in other professional situations.”

Education has been a common thread and Anna’s role has taken her into many schools to help bring awareness and upskill teachers around FASD. She is adept at facilitating collaborations between schools and whānau to come up with individualised plans for ākonga that work towards inclusive education. It’s a strengths-based approach tailored to each tamaiti or rangatahi with FASD – and it works.

Of course, to be able to be there for whānau and speak on their behalf, all of Anna’s empathetic strengths are needed. “Whanaungatanga is the beginning of everything I do,” she says. Building relationships with those she supports through working together and shared experiences is the basis of the essential trust and respect required. “The support process has got to be whānau-led – I do a lot of listening!” she adds.

“Something of huge value for me is tumanako – hope. In challenging times it can be hard to hold one’s own hope, so one of the privileges of my role is to hold the hope for the parent or caregiver until they can hold their own.”

Anna’s education process has continued over the last year as the FASD-CAN Navigator. “I’ve been working towards becoming a Certified Facilitator of the Neuro-Behavioural Model, which has been a stimulating and thought-provoking year of study. It’s reinforced my belief that deepening our understanding of the link between brain and behaviour helps to increase empathy, which then leads to seeing the behavioural symptoms of FASD as needing support, not punishment. This can improve life-long outcomes for whānau supporting those with FASD – and of course for the individuals themselves. I’m looking forward to presenting this training throughout the motu once I’m certified in February 2023.”

And for Anna the parent? “On a personal level, the biggest thing I'm constantly learning about FASD is around finding a level of acceptance – acceptance of our daughter, acceptance of myself as a parent in my strengths and failings, acceptance that I need to be proactive in almost every area of our daughter’s life and be ready to pre-empt everything to improve her opportunity to experience triumph and joy. And I find that as my acceptance grows, so does my empathy.”

The Navigator role is only enabled in Auckland at the moment but we hope to gain funding to roll it out around the motu in the future. If you are based in Tāmaki Makaurau and would like to get in touch with Anna, her contact details are below.